He’s big and he’s bad, I love him like mad  and Mumma ,he’s the best Ive ever had  ( the lyric from the current hit from Stooshe)………. Not really the sort of message you ever want to hear from your own daughter is it ? It doesn’t even seem to be a terribly sensible route for the young lady singing either ……..

However , when it applies to your football team , its kind of alright isnt it .

As the new season approaches , its difficult to understand how teams actually go about buying new players . Do they really have a list of targets and in Charlton’s case , we don’t mind if the centre half or midfielder we eventually get was number 38 on the list of desirable centre halves or indeed wasn’t on the original list atall .

Perhaps SCP and Mr Jiminez sit down start a A for Arshavin , shouting them out like snap until they get to Z for Zonko.

Anyway, we seem to be stuck at B for Baldock , so don’t worry there’s the whole of the rest of the alphabet to go through yet , really not sure about  David Goodwillie though , heavens knows what fun Stooshe would have with him

So it was a moderately pleasant summers evening , not raining for a change , so in a rare moment of spontaneity , I said to the wife why don’t we pop along to Epsom for a spot of evening racing .

Its only about 30 mins from us and Ive been many times before and enjoyed balmy summer nights passing twenties over to the grateful accountants of the turf . Well , the traffic and queues were terrible and it took us an hour to get there . Never mind , we parked up and ambled across the beautiful downs already sensing the equine equivalent summer  smells of willow on leather , and other smells . So we get to the entrance to be told that its 40 quid each …. 40 QUID , 40 QUID , HOW MUCH , thats 80 QUID for the 2 of us to watch 3 or 4 races . All in all , after bookies losses , a Carling lager ( yukk) , a prawn sandwich , I will be close to £200 worse off .Well sir , thats because , weve got the world famous , Frankie Valli & his seasons on after racing ….

So what I say  , a) I thought he was dead , b) I didn’t like him in the first place and c) I’m definitely going home before he comes on . How about we promise to turn our backs when he comes on  As a matter of interest , when I set out from home clutching my Racing Post , there wasn’t a mention of Frankie Valli in the form guide  ….. Anyway, all to no avail , its either  80 sovs or we can’t come in .

It took us roughly 30- seconds to conclude that it wasn’t indeed ‘Oh what a night’ and turn tail , return to our car .

The depressing thing about all this for me as a racing fan is that I used to be able to amble up , watch a few races in relative calm , no queues , all very civilised .  But last night , not only was it £80 for the 2 of you , but it was absolutely packed and I’m pretty sure they weren’t all related to Frankie and the band .

Oh how I yearn for those bygone days when all the courses were going skint and it was only me and 20 other saddos clutching our rolled up copies of the Post . 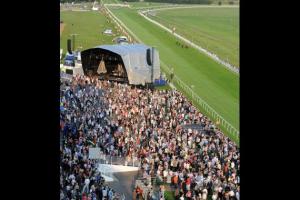